The establishment of the Academy of Sciences and Arts of the Republic of Srpska represents a program of placing universal values of science and art into the service of our nation's rebirth and prosperity. The Academy as a symbol of the spiritual sovereignty of Serbian people in the Republic of Srpska does not deny the right for spiritual sovereignty of other nations in Bosnia and Herzegovina, but clearly announces that it does not accept guardianship or patronage under its spiritual activities. It will act in accordance with frequently tried criteria and values accepted in world science and art. In the light of that determination it rejects prejudices and stereotypes full of ideology. Its only criteria are the truth and tested ideals of the truth she dedicated itself to. The academy is the institution which main aim is to urge the development of science and art, to preserve, cherish and upgrades culture, spirit and creative potentials of its people. It is a working and representative institution of special importance and should contribute to material development of the Republic of Srpska, its spiritual enrichment and democratic affirmation. It does not belong to any political party and it advocates general national and human values. It is the factor of organized work for the sake of faster spiritual regeneration and unity of our whole nation.

The world we live in is rich in paradoxes and contradictions, shaken by economic and political crisis; its social cohesion is destroyed by exploitation, discrimination, obstinacy, injustice and armed conflicts. The fight for the new world order, domination, prestige, power and new markets get characteristics of state and multinational pressure.

In our times spiritual crises is, among the other things, provoked by the following factors: the weakness of theoretical thought, crises of the sense of art, commercialization of culture, gap between freedom and enlightened thought, regression of enlightenment. On the other hand the world is interpreted by means of naive, simplified, false and nonscientific facts. We should add to this the phenomena of advertising trash, simple humor, pulp fiction, senseless political speeches and open support of the politically suitable but incompetent in economy, science, culture, art and social life.

The mankind found itself in a very contradictory world, and people live in such a spiritual climate at the beginning of the 21st century. In this social encirclement the Academy started working, creating its program, eager to confront the problems of our times, to fight for a different spiritual climate and better world, to search for fuller and richer meaning of life, believing in its implementation.

The Academy will use scientific arguments to oppose the occurrence of racism, religious fanaticism, ideological exclusiveness and other extremisms that provoke distrust between people, antagonistic divisions, hatred, clashes and revenge. We must not create social community full of people who lost every hope in peace and tranquility. It is on us, as everyone else, to pledge for less fewar, sense of insecurity, hatred, anxiety, pain, sorrow and suffering in human lives, and more security, pleasure, joy and human beauty. We must create such social conditions where a young man will not meet only tragic world, but primarily better and more humane.

It is our duty to oppose those who maliciously falsify history, write books and produce different information where they disgrace our nation, deny its values, place and role in history. If we let falsifications become truth and to write history upon them, the future generations will hardly be able to make corrections, because they will be short of scientifically reliable facts. That is why our duty is to fight for the truth and thus fulfill the obligations toward future generations. 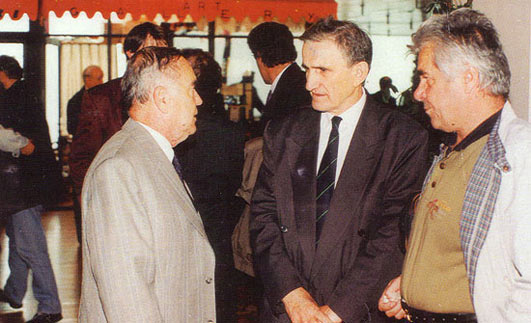